The internet is perhaps the most important and life-changing invention of the 20th century.  It required the invention of a new global communication medium capable of carrying vast quantities of information across trans-oceanic distances, reliably, cheaply and efficiently.  Unpredictably, this turned out to be optical fibres made from the two most common elements of the earth’s crust, silicon and oxygen (silica).

As the internet traffic grows by some estimates at 20%/annum there is constant pressure to find more fibre capacity, although at a few $/km the option remains to simply install more fibre, rather than find better fibres.  However, in many applications where duct volume, single fibre capacity, reduced transit time or better phase stability is critical, there will be a role for novel advanced designs such as hollow-core or multi-core fibres.  Transit time and stability is becoming increasingly important for global timing, time-stamping for financial trading, 5G wireless (where the density of masts is determined by the delay between them) and autonomous vehicles.

With the huge increase in data traffic comes a headache in how to store the information for the requisite period of time that is often mandated by banks and government – up to several hundred years.  A new storage medium based once again on silica appears a leading contender to replace today’s tape units.  The technique, known as 5D storage because of the way each bit can be written and read, provides both high storage density and an extraordinary lifetime estimated at thousands of years.

The parallel field of high-power fibre lasers also relies on silica fibre. This field has seen a revolution in industrial laser processing and the market has grown to several $B/annum.  Because of its robust, monolithic nature and its efficiency, the fibre laser is finding favour in defence applications as well.  With its extraordinary combination of low expansion coefficient and high optical damage, silica is the unassailable material of choice for this hugely important industrial market. 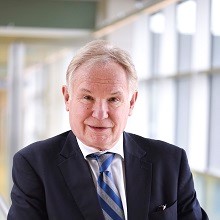 Prof D. N. Payne is a research pioneer in photonics, having been in the field for over 45 years.  Payne’s contributions are acknowledged as seminal in many areas of optical telecommunications, one of the greatest scientific successes of the last three decades. His work spans many other areas of photonics, from optical sensors to nanophotonics and optical materials.  He has made several of the key technical achievements in almost every area of optical fibre technologies and his work has had a direct impact on telecommunications, as well as nearly all fields of optical R&D.  He is the most highly honoured UK scientist in photonics.

Payne’s pioneering work in fibre fabrication in the 70’s resulted in almost all of the special fibres in use today.  He led the team that in 1985 first announced the silica fibre laser and the Erbium-Doped Optical Amplifier (EDFA), the device that fuelled an explosive growth in the internet through its ability to transmit and amplify vast amounts of data.  The EDFA is widely regarded as being one of the foremost and most significant developments in modern telecommunications.  The fibre laser is now also undergoing rapid growth for application in manufacturing and defence.  Payne led the team that to international acclaim broke the kilowatt barrier for fibre laser output.

Unusually, David combines world-leading science with commercial activities and has been the driving force behind a several spinout companies, creating wealth and employment in the surrounding area. He has been awarded the top American, European and Japanese prizes in photonics, a very rare achievement.